History of the land and people

The Dakota is a nation of Indigenous peoples whose traditional lands span modern-day United States and Canada. Historically, the Dakota nation occupied a territory that included modern-day Wisconsin through Minnesota, and north to Ontario through to the Prairie Provinces.

The Dakota Nation relied on the tatanka – or buffalo. The tatanka provided the Dakota with many of the elements they needed to survive, such as food, shelter, clothing, tools and weapons. The tatanka holds great cultural significance to the essence of the Dakota people and is a prominent element in their teachings and cultural values.

The Dakota way of life emphasizes respect for others and the environment. The Dakota believe that peace and harmony are essential elements for relationships to living creatures and all of creation. The word “Dakota” means “friend” or “ally.” Throughout history, the Dakota has a long history of relationship building with other Indigenous nations and with European newcomers. 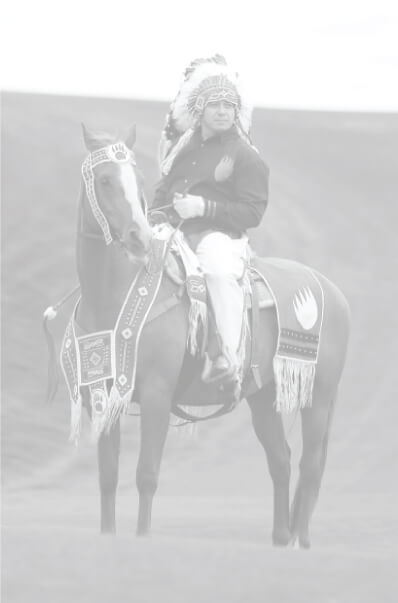 The Dakota has a long-standing relationship with the British Crown, dating back to wampum ceremonies in 1762. As testament to this relationship, a treaty was signed in 1787 between the British and the Dakota. Dakota honored this treaty as military allies of the British Crown in the American Revolution and in the War of 1812.

In 1862, following the Minnesota Uprising, also referred to as “Dakota - US War of 1862,” the Dakota, led by Chief Whitecap, Chief Standing Buffalo and Chief Littlecrow, followed their old trade routes along the Souris River and entered their old territories. In spite of Dakota claims to this territory, they were confronted with a border they helped create during the War of 1812.

In 1879, Chief Whitecap and his people settled in their current location twenty-six kilometers south of present-day Saskatoon. In the past, the area was known as “Moose Woods.” The Whitecap Dakota people continued to build friendships and alliances. Personal, trade and labour relationships connected the Whitecap Dakota to their nearby communities. In August 1882, Chief Whitecap counselled John Lake on the location for a new temperance colony that would become the City of Saskatoon. Today, there are three Dakota communities in Saskatchewan; Standing Buffalo, Wahpeton, and Whitecap First Nations.

The Whitecap Dakota First Nation is a modern and progressive First Nation recognized nationally for its economic and community development successes. Whitecap Dakota’s social and economic success is attributed to its commitment to the spirit of the alliance as many of their projects began with partnerships in the local business community and public institutions.

Through resourcefulness, creativity, and entrepreneurial vision, Whitecap serves as a business development leader in Canada today. The development and growth of the Whitecap community ensure the traditional cultural values of the Whitecap Nation - such as respect, alliance, and resilience - will persist in the future.